The plot of this very engrossing courtroom drama revolves around an Israeli woman’s desire for a divorce and her husband’s refusal to agree.  Viviane, the wife, needs a gett, which is a divorce document that is only obtainable in Israel by going through the rabbinical court.  The process can take years and there is no civil recourse.  It is up to the husband, Elisha in this case, whether to give the wife a divorce.  This film shows that personal freedom can be difficult, if not impossible to achieve.  I will leave the issues of how much liberty was taken with the story or whether it accurately depicts the rabbinical court for others to discuss.   My focus is the contrast offered up by the film in individual freedom and the right to make choices in marital agreements that benefit both spouses and their children.

The film depicts Viviane’s struggle in and out of court for five years.  There are times that her husband fails to appear and there are no consequences. Viviane is at the mercy of her husband.  Time and time again, the judges instruct Viviane to go home and try harder to get along and make a life with her husband.  Testimony from both sides indicates that the marriage is not a healthy one.  Viviane’s morals are called into question based upon the hearsay statements of the husband’s representative.  The court is critical of Viviane when she tries to speak up for herself.  In one striking moment, the court strongly criticizes Viviane for taking her hair down from its hairband. At another crucial point when Viviane’s lawyer brings out her truth about what life is like in the home, her lawyer’s own morals and motives are attacked. The dialogue by and between the husband and wife make it clear that there is no matrimonial harmony and that it is extremely unlikely that it will ever be restored. Nevertheless, the husband insists that the wife return to the marital home. Many court appearances are made to no avail.  To me, the story is both fascinating and frustrating. 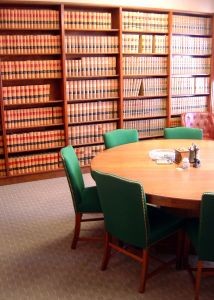 As a mediator in New York, what strikes me most about the film is the contrast between the freedom of the couples with whom I work to make their own decisions about their lives rather than have a third party decide.  The film demonstrates the unfairness that can result when one party has power over the right to divorce.  Even though divorce is often painful under the best of circumstances, couples that have the right to make their own decisions about their lives are indeed fortunate!